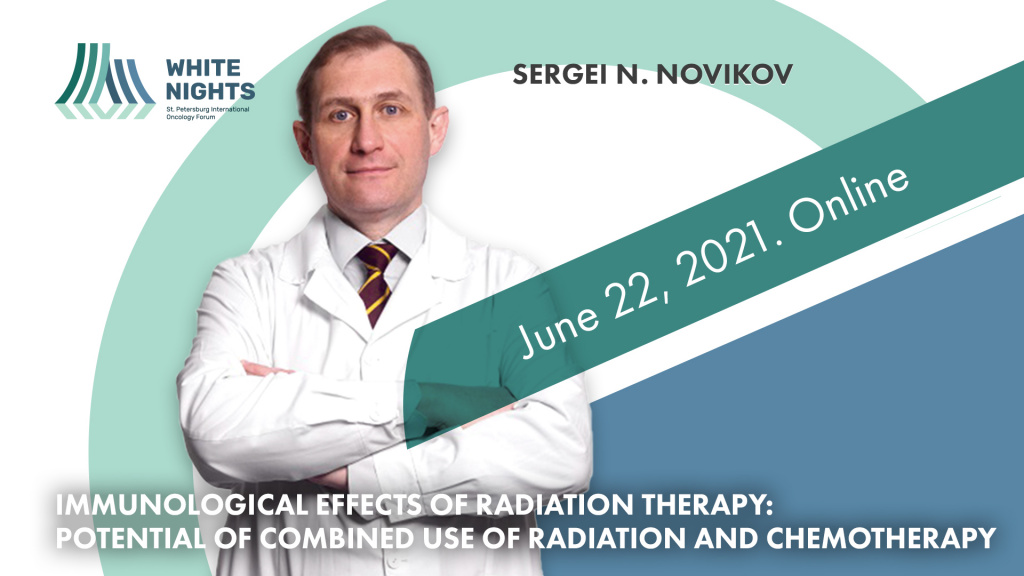 The main advancement made in the XXI century in the field of cancer treatment was the discovery of the mechanisms and the development of drugs that allowed to activate the anti-tumor immune response. For some cancers, such as melanoma and non-small cell lung cancer, immunotherapy may help to obtain the overall response rate in about 15-20%. However, immunotherapy drugs do not work for most patients, as they do not help to achieve any lasting control over the disease. On the other hand, it was discovered that the combined use of immunotherapy with radiation therapy can significantly increase the efficiency of treatment, in some cases even by 1.5-2 times. The immunological aspects of radiation therapy will be discussed at the session under the same title which will take place on June 22 (stream No. 3). The key speaker is Jorge Contreras from Hospital Regional Universitario de Málaga, President of the Spanish Society for Cancer Radiology. This is what Professor Sergei Novikov, Chair of the Radiation Therapy Department at the Nikolai Petrov National Medical Research Center of Oncology (Saint Petersburg, Russia) shared with us on this topic.

Originally, the enhancement of the effect of immunotherapy associated with radiation therapy was registered in NSCLC patients. The combined use of radiation therapy and immunotherapy drugs was found to achieve a much more significant and proven anti-tumor effect of therapy, than when each treatment option was used in isolation. Later, it transpired that the same effect could be observed in combination treatment of cancers of other sites.

That is why, today the effects of such combined use of immunotherapy drugs with radiation therapy are being studied in patients with other cancers, such as cervical cancer, endometrial cancer, esophagus cancer, melanoma, and head and neck cancer. At present oncologists are working to find the optimal balance of radiation therapy and immunotherapy, to design the correct doses, to determine what kind of patients will respond better, to discover the mechanisms of synergy of these two treatments and to increase their efficiency.

The Nikolai Petrov National Medical Research Center of Oncology has been studying the systemic immunological effects of stereotactic radiation therapy since 2019. First outcomes of this study have demonstrated that radiation therapy induces immune changes which are geared to actively fight cancer in about 60% of patients. Since, in the first place, such changes involve T cell lymphocytes which attack the tumor, the activity of regulatory T cells, which limit the anti-tumor response, is also suppressed, and the activity of T helper cells, which assist T cell lymphocytes in their fight against cancer, increases. It was discovered that in patients without PDL expression (such patients, as a rule, do not respond to treatment with immunotherapy drugs) stereotactic radiation therapy leads to more significant immune system changes towards a better anti-tumor response. Thus, it may be theorized that the combined use of stereotactic radiation therapy with immunotherapy in such patients may prove to be an effective way to enhance the anti-tumor immune response. This discovery opens up promising new avenues in cancer treatment.

Please, join the online streaming of the Immunological Effects of Radiation Therapy session on June 22 from 13:00 to 14:30 (Moscow Standard Time/UTC+3) (stream No. 3)